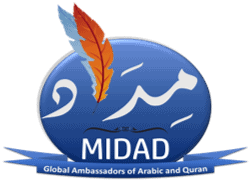 Midad Centre was established in 2017 at the hands of brothers passionate about the Arabic language based in both the UK and Egypt.

Their passion for the Arabic Language pushed them to establish a center; not merely to generate profits, but instead to serve and spread the Arabic language; the language of the Qur’an, the language that’s status was raised when Allah subhana wa ta’ala chose it for His book { إِنَّا أَنزَلْنَاهُ قُرْآنًا عَرَبِيًّا لَّعَلَّكُمْ تَعْقِلُونَ } ‘Indeed We have sent it downed an Arabic Qur’an that you might understand’ Surah Yusuf, verse 2.

Furthermore Midad understands it is compulsory upon Muslims to learn in Arabic and is therefore feels obliged to assist Muslims in this endeavor, as Shaykh al Islam ibn Taymiyyah said:

‘Indeed the Arabic Language is from the religion and knowing Arabic is an obligatory duty, If it is a duty to understand the Qur’an and the Sunnah, and they cannot be understood except without knowing Arabic, then the means that is needed to fulfil the duty also becomes obligatory.’

We are simply here to call, and hopefully assist the billions of Muslims around the world to learn Arabic.

And we do not want to stop there but we also want to call non-muslims alike to learn this beautiful rich and poetic language that please any ear that hears it even without understanding it.

Finally we ask Allah subhanahu wa ta’ala to reward abundantly all those who aided in the establishment of Midad, and all the teachers who continually strive in serving the Arabic language and their students, ameen.